Not a day goes by where I don’t come across an article, publication or scientific paper that mentions a potential “new” medical use for cannabis. NBC News just published this interesting piece on medical marijuana conducted by the Cannabis Initiative team at UCLA.

I must point out, however, that what really arouses my curiosity in the cannabis space is a particular compound of the plant: Cannabidiol (aka. CBD).

The matter at hand:

Today, I’d like to dedicate this post to a very interesting debate regarding the use of CBD in overcoming opioid addiction. Opioid addiction is an extremely serious Public Health matter. So much so that the US Government declared it a National Emergency in 2017.  Lots of press was brought about in 2016, when data about opioid-related deaths came to light. The number of deaths was staggering. This occurrence was predominantly significant in North America, and it still is, in addition to having spread globally.

According to the National Center for Health Statistics at the Centers for Disease Control and Prevention (CDC), almost 50,000 people died in 2017 due to opioids misuse in the United States. Canada stands second as far as the opioid addiction is concerned, reporting 2,400 opioid-related deaths (or 8.8 per 100,000 population) in 2016. The problem is slowly but surely spreading to the rest of the world. Despite their best efforts to control opioid dependence and related deaths, the US has essentially failed to halt the steady increase in the death rate associated with the opioid misuse over the past fifteen years.

As to the disease itself (because yes, addictions are considered diseases), it’s worth mentioning that it is not only a problem for the people suffering from it – In addition, their loved ones may get also devastated. Social stigma is the major issue to be faced by the sufferer as well as their family members, especially if the outcome ultimately is death.

In such a gloomy situation, reading articles like “Treating Opioid Addiction with CBD?” from The Analytical Scientist bring a ray of hope. Likewise, several reports are providing firm empirical information suggesting that cannabinoids are “the only” hope to help those suffering from opioid-overuse issues.

Men’s Health reports a compelling case of a young man who becomes an opiate addict after taking prescribed Oxycontin (an opioid sold as a prescription medicine) for pain relief. He was under opioid treatment for almost seven years, and eventually tried to get rid of his dependence. Due to withdrawal syndrome, he was unable to get relief. In the meantime, a friend suggested he try CBD. The outcome was remarkable: He kicked his habit successfully. There are hundreds of similar stories suggesting that CBD is an excellent choice to overcome the opioid addiction epidemic.

If CBD is such an intriguing alternative for people suffering from opioid overuse and addiction, why it is not being approved to treat people in North America, where the death rate is so alarmingly high?

CBD is currently classified as a Schedule 1 drug by the United States Drug Enforcement Administration (DEA). Notably medical usage of Class 1 drugs is prohibited. This is due to the fear of their abuse. (I expect CBD to be reclassified this month to Schedule 4).

The benefits of CBD have been so overwhelming that, in June this year, The New York State Assembly approved a bill for the usage of marijuana for opioid abuse treatment. This bill must still pass through several other statutory bodies; however, initial approval is an encouraging sign paving the way for CBD usage in opioid addiction.

It is important to mention that medical marijuana is already used legally in the state of New York for treating severe conditions like AIDS, Parkinson’s, Huntington’s disease, and pain control. All this suggest that pressure is building, and that the US is very close to approving further clinical research aimed at using CBD instead of opioids prescription medicine, or even overcoming the issues of opioid addiction.

Some further commentary on CBD…

CBD is isolated from the cannabis plant, but it’s not its only compound: There are several other cannabinoids (to be specific, 483 known compounds) found in the plant, of which, the two main ones are tetrahydrocannabinol (THC) and cannabidiol (CBD).

THC is a psychoactive compound that induces a general change in perception, heightened mood, and increased appetite. In contrast, CBD doesn’t have these mind-changing effects. CBD is known to have many medical benefits, such as relieving pain, helping with diabetes, anxiety disorder, sleep aid, tension relaxer, and acting as a “substitute” for opioids, and overcoming the addiction.

As a medical doctor, I strongly believe that the use of CBD to overcome the “opioid epidemic” is timely. Yes, the controversy is still there for now, but as more clinical work and studies are conducted the proof will be in the pudding. I’m delighted to be part of this most engaging and interesting field. The excitement in the Cannabis scientific arena brings high hopes!

Feel free to share your comments, thoughts and feedback:  anna@internetbullreport.com ? 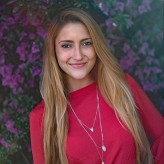 Medical Doctor specializing in Integrative Medicine and exploring the Medical Cannabis opportunity. Also fascinated by the convergence of Life Sciences and Technology - in particular Artificial Intelligence and how it will affect health care in the future. During my internships and volunteering, I have worked hand-in-hand with well-know physicians and professionals of the Health-Biotech sector. I've been awarded with numerous awards of excellence and scholastic scholarships. I'm a co-founder of an IoT startup that aims to help smokers successfully quit. Born and raised in Barcelona - Spain, with a zest for traveling, learning and expanding my horizons. Always curious, hard-working, open-minded and self-motivated.

Yippy Inc. - Great Time To Strap Some On

This site uses Akismet to reduce spam. Learn how your comment data is processed.