Today’s Story is About Narayana Murthy.

Who is this, you might ask? Well … here’s his story.

Narayana Murthy is a 72-year-old co-founder and former CEO of Infosys, the first Indian company to be listed on the NASDAQ (now on NYSE: $INFY) and one of the world’s software giants with over 200,000 employees.

Narayana is a self-made billionaire.

With Infosys, he has created six other billionaires and over 4000 millionaires. He has been listed among the 12 greatest entrepreneurs of our time by Fortune magazine.

The Economist ranked him among the most admired global leaders, and he was awarded:

Impressed? Wait until you read the rest.

He’s born in India in 1946, one of the then poorest countries in the world. His family didn’t have furniture at home, so he was sleeping on the floor.

His father told him to choose his hobbies carefully and select ones that wouldn’t drain much from the family budget. So, his main hobbies were reading, listening to music, and talking with friends.

Back in the early 1980s, it was almost impossible to conduct business in India. Corruption and a big array of restrictions plus its socialist government had the power to decide which enterprise would succeed and which one would fail.

Infosys was built with $250 saved up by seven founders.

Murthy and Infosys were located in Bangalore, and Delhi was 1500 miles away. Murthy couldn’t afford a flight, so he had to take the train. Because of bureaucracy, it required three years and 50 visits to Delhi – an equivalent to 200 days in total travel time.

Narayana was persistent and endured.

The team was dealing with a customer in America who allowed them to program on his computer. Six of the co-founders traveled to the United States to work on-site. At the same time, Naranya remained in India to clear up formalities and obtain the license to import their own computer.

It was impossible to send the team’s work between the US and India since there was no internet to submit their code. So, they used to write it out by hand and fax it — a quite tedious process. Not to mention the errors that would occur in the programming code and the lengthy delivery time, which would easily take 2 to 3 weeks.

After years of struggles, and the hassle of immense operating costs, they finally imported their computer, but that was only the beginning.

Today Narayana Murthy is a billionaire, and Infosys is the largest software company in the world, employing 200,000 programmers; this is more than Microsoft, Apple, and Google combined. In 2003, Naranya was the nominated as entrepreneur of the year.

Despite hopeless beginnings, he achieved unbelievable success. So what is it then, that makes billionaires, such as Narayana Murthy, thrive despite all the hardship they endure?

It seems that “the secret” is internal.

Billionaires know that it is up to them to make a move and make things happen. It is clear that they don’t allow unfavourable conditions to determine their success. Instead, they believe in cause and effect.

So dear reader, if you enjoyed this story, we invite you to share this story and inspire one person who is precious and valuable to you. 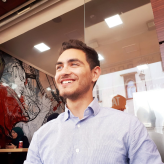 I love to read books and explore ideas to build wealth. Everyone got a story, and it excites me to learn from every human I encounter! Couple things: Bachelor in Business Administration from Oklahoma City University, USA. Business Dev Specialist and digital marketer at IBR. Facebook Certified Digital Marketing Associate “As a serial entrepreneur, building IBR is a new challenge for me. I believe in my team and I can’t wait to do great things together.”

The Index Fund Bubble - Should You Be Worried?